Hands off that kiosk

"I think you might be muted". That means hello in a world where consensus has been reached that human interaction can only happen on video calls from now on. So, please accept my contagion-free greetings from afar.

It's been a number of weeks since I last interrupted your inbox. Fortunately, the only reason for that has been lots of work in the newly-ordained isolation of quarantine. In this installment I'll show off Whally's brand-new check-in kiosk, with which families and staff can record their presence for the day, assuming the authorities ever allow anyone to go to buildings other than their house in the future.

I'm sure I don't need to further motivate this, because everyone loves kiosks....right? Since the opposite is true, and I've never made a kiosk before, I tried to make one that I would actually not hate using (or administering). I'll let you judge the outcome -- let's check it out. 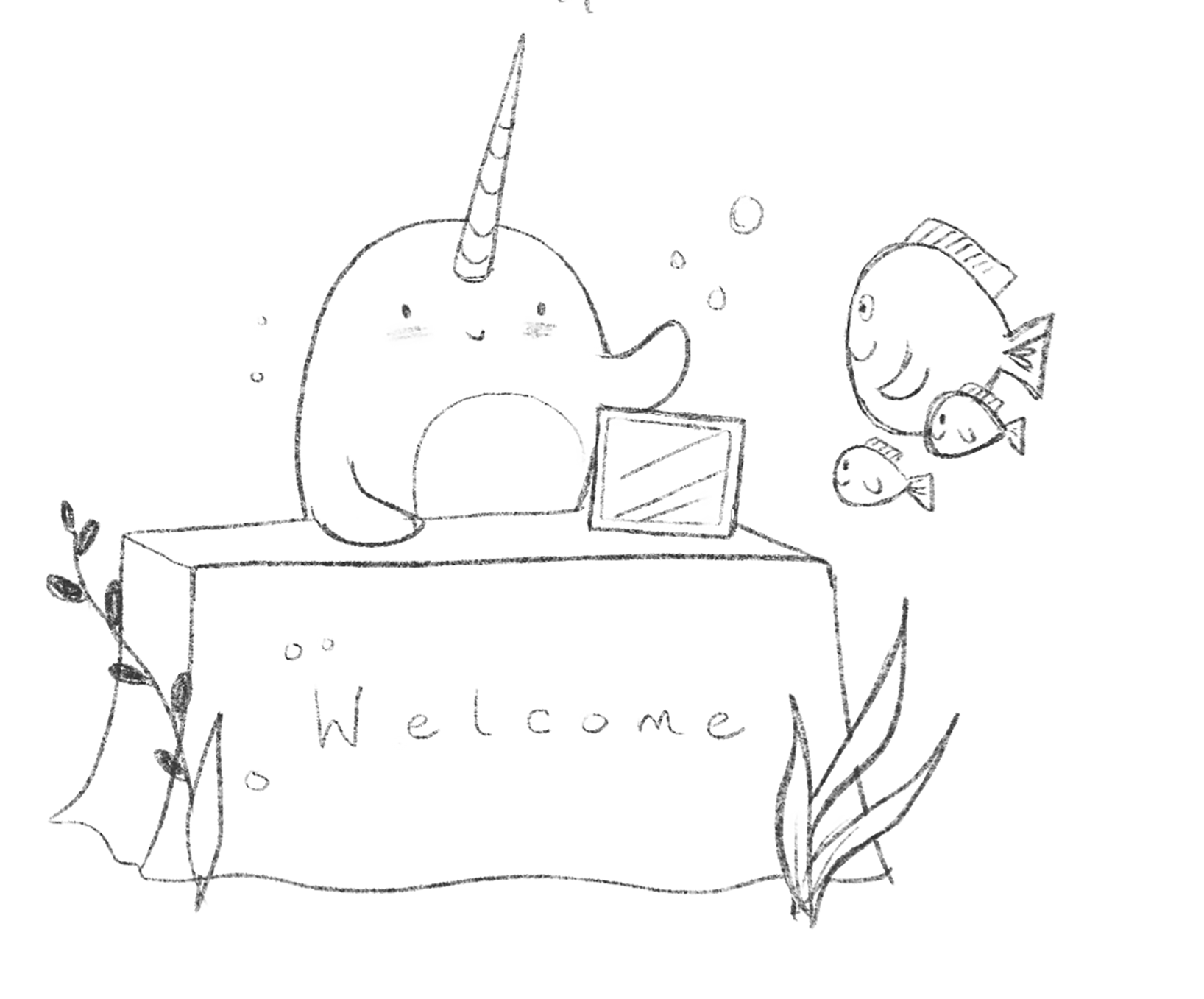 Hands off the kiosk!

Many kiosks already exist at schools, airports, restaurants, etc. As usual, the question confronted my brain: "please justify why you're spending time creating a new instance of an existing thing?" So I scrambled and declared: because COVID has changed everything!

Maria Montessori argued eloquently that "the hands are the instruments of man's intelligence." Health officials have now updated this to "the hands are the reason we can't have nice things, do no use them ever, especially on your face." I quite prefer the first interpretation, but here we are.

It follows that one thing people might not want to touch every day is the kiosk at their school. So, I decided a new kiosk should work in such a fashion. Hopefully this video shows it in action:

What sort of voodoo is happening here? Let's break it down:

At no time did you touch the kiosk itself. It should also offer some unique advantages over other approaches beyond the touch-free (and magical?) aspects:

But I want to touch

Sometimes, some good old-fashioned touching is really what people might want. And I support this. As such, Whally also provides a more traditional PIN-code check-in option using (gasp!) your fingers. This is the mode we're all familiar with: enter your name/code, and tap the screen to finish.

Here's how that looks: 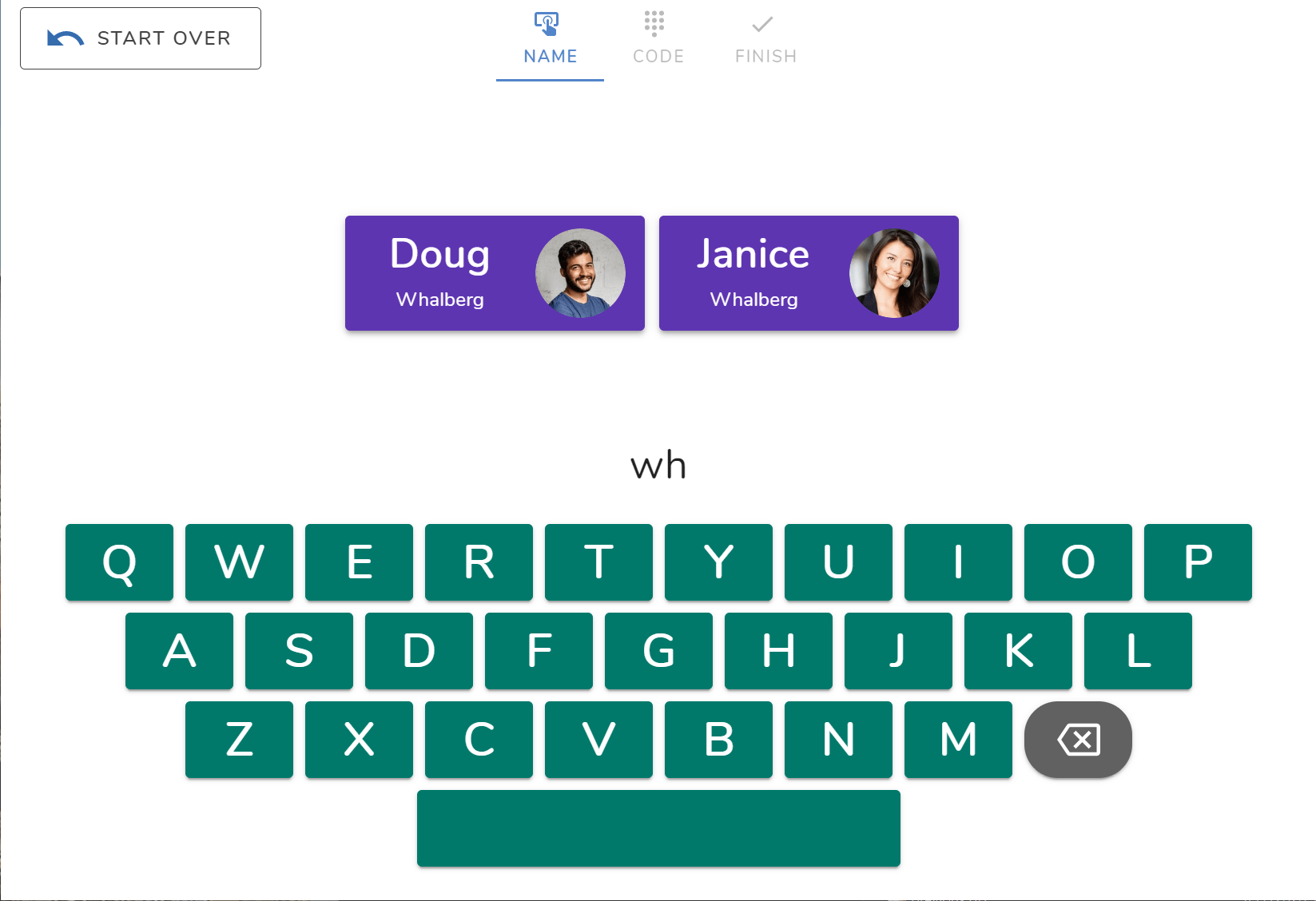 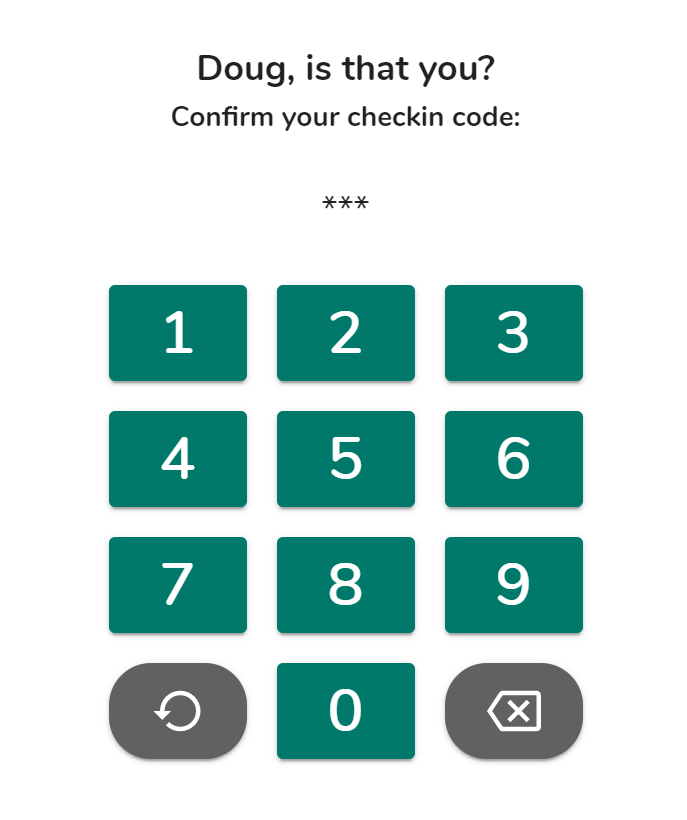 Codes can be any (configurable) length and don't need to be unique at the school, because users select themselves as the first step.

As promised, let's talk about feedback. This doesn't seem like it has anything to do with kiosks, but I think it should (not my idea, hat tip to Ray). The premise: you want parents or staff to give you feedback about the school. The reality: most people find surveys annoying and ignore them. The idea: provide a very quick and seamless opportunity to provide feedback when it is most likely to occur to you: at the end of the day when literally leaving the school. Very likely, good or bad feelings worth communicating happen here.

Hence the "5 second feedback" feature, which provides a feedback input immediately after check-out (or perhaps other targeted times). Parents can select a simple rating and optionally add comments, anonymously if they choose: 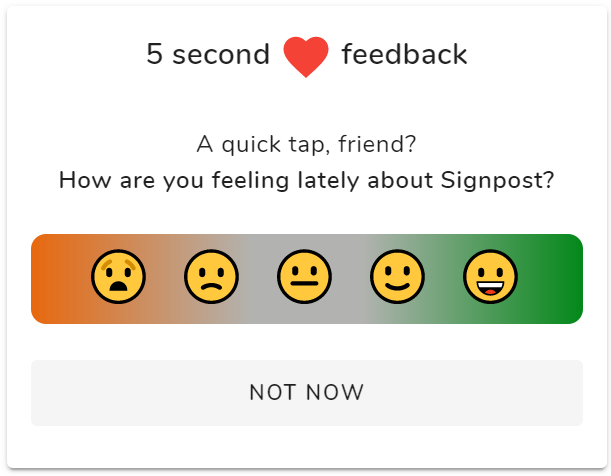 Given a regular and likely randomized collection, the hope is to build a regular flow of feedback that acts as a pulse of community sentiment over time. It's the opposite of a census, asking for very little, relatively frequently. If it works, there's a feedback dashboard to get a quick glance and dig in as needed: 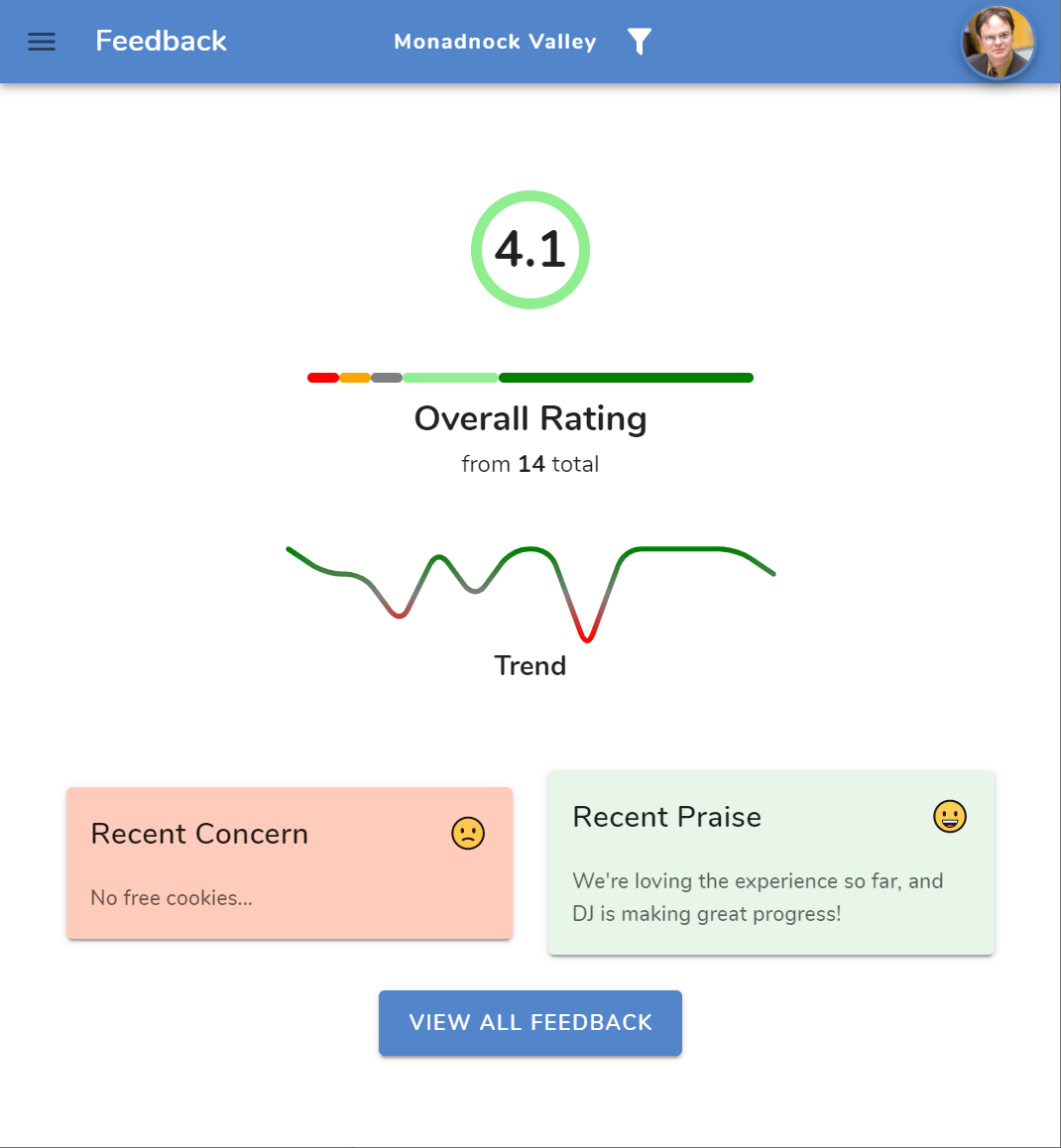 We can see immediately a score of overall sentiment and also how it is trending over time. The full list of ratings with comments is available at a click, which could be the basis for follow-up and further analysis.

Most kiosks are pretty boring and stale. Whally allows customization, including a "message of the day" and photo that can be changed as desired for an extra touch. Going forward, it ain't no thang to make configurable many aspects of the kiosk look and feel, like background color and layout. An example: 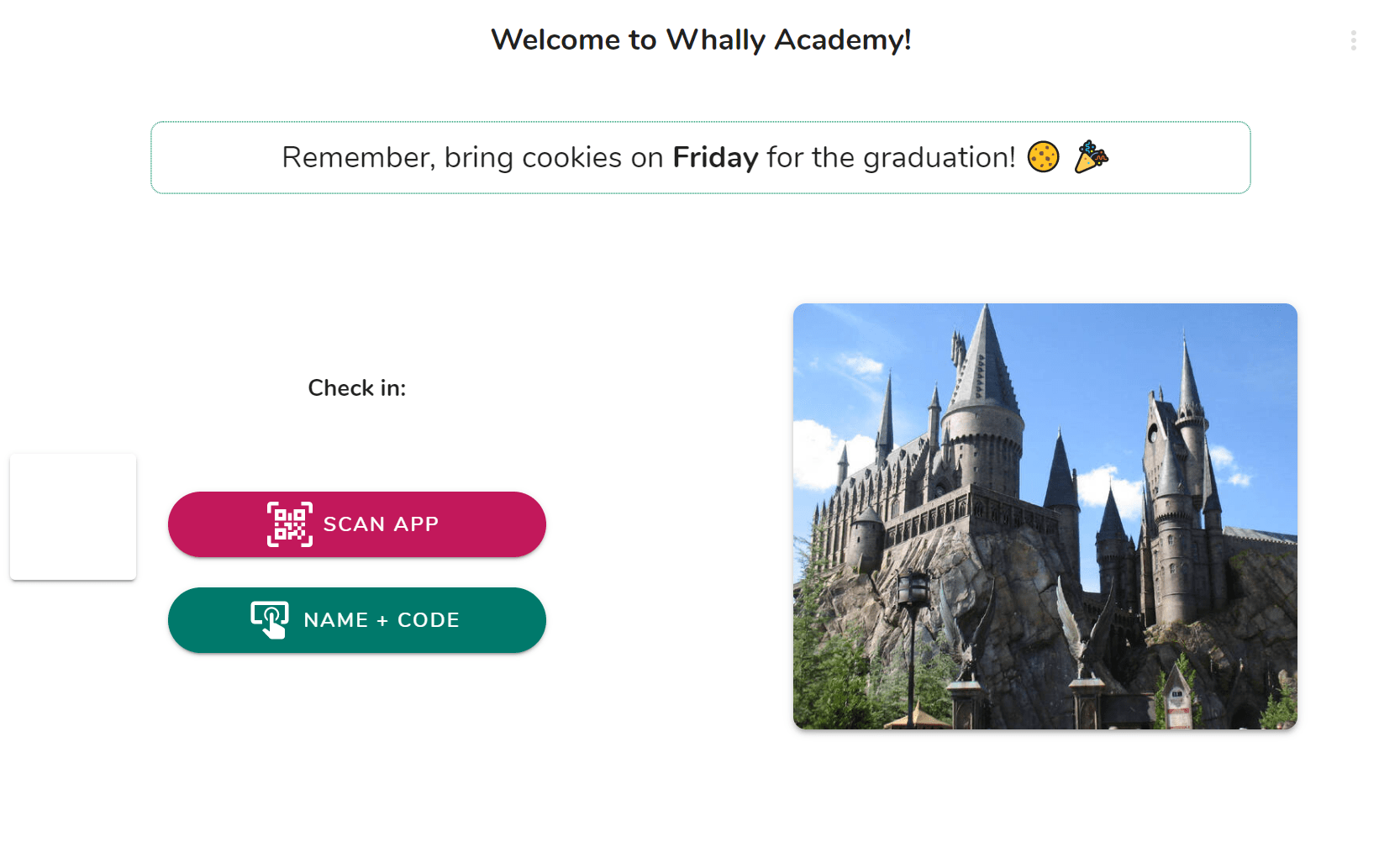 Beyond the parent/staff experience, significant attention has been paid to ease of setup and management.

I hope you are now as jazzed about kiosks as I. It's been a fun adventure so far.

Read on: Attendance and reporting